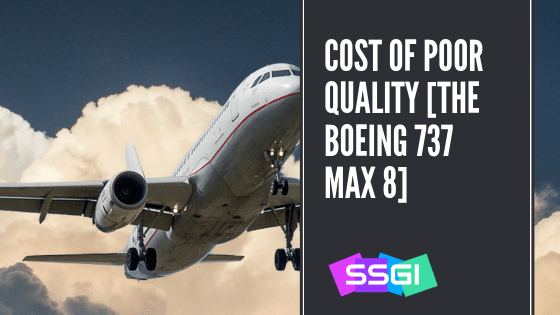 According to the Six Sigma Global Institute (SSGI), a leader in Lean Six Sigma education and certification, the Boeing 737 Max 8 disaster is a classic example of how organizations risk the consequences of poor quality, referred to in Lean Six Sigma as the Cost of Poor Quality or COPQ.

Over a period of less than six months, two Boeing 737 Max 8 aircraft suffered the same tragic fate.
Shortly after takeoff, they crashed when their flight control systems malfunctioned and caused the nose of the plane to inappropriately drop. The pilots struggled to raise the nose and overcome the automated system, but their struggle was unsuccessful. All 346 passengers and crew died on impact.

Six Sigma Global Institute’s (SSGI) co-founder, Professor Barry Shore, and a former Boeing design engineer, said that “There is evidence to suggest that Boeing may have compromised the development and testing process and that we must be especially careful to avoid compromises like this where failure can lead to high consequences.”

In Lean Six Sigma these consequences are captured in the concept called Cost of Poor Quality or COPQ. It is a concept that expresses the costs incurred should a product or service fail to deliver the quality expected by its customers.

The value of the lives lost is, of course, incalculable, while the cost to repair, test and deploy a software upgrade is relatively small. Added to these costs are the legal and settlement costs, as well as the loss of future revenue given the competitive battles between Boeing and Airbus. The total is certain to be in the billions of dollars.